This story is cross-posted from our EmLab partner's Blog.

In a previous blog post, we left readers with the notion to “Eat fish! It’s what’s for dinner, and will increasingly be so for the foreseeable future.” But how does the recent advent of cell-based seafood play into this equation? Is there a seat at the table for the type of “lab-to-table” dinner party experience full of faux food products described in this recent New York Times article?

The nascent cell-based seafood industry – where small cell samples are removed from a fish, grown in a bioreactor, and then formed into muscle tissue – has two major tenets at its core: lessening environmental impact and increasing animal welfare. Growing fish in a bioreactor effectively ticks the animal welfare box, but what about the environmental impact and conservation benefits?

We teamed up with researchers from the National Center for Ecological Analysis and Synthesis (NCEAS) to dive deeper into that question. While conservation benefits can include everything from reducing Greenhouse Gas (GHG) emissions to saving a single species, we looked specifically into what would need to happen in order for cell-based seafood to displace wild-caught fish as a menu option, which would reduce fishing pressure on wild stocks, thereby increasing stock biomass of wild populations. In our recent paper in Fish & Fisheries, we outline 9 necessary steps to get from cell-based seafood production to more fish in the ocean, detailing the challenges at each step and the potential to overcome them. 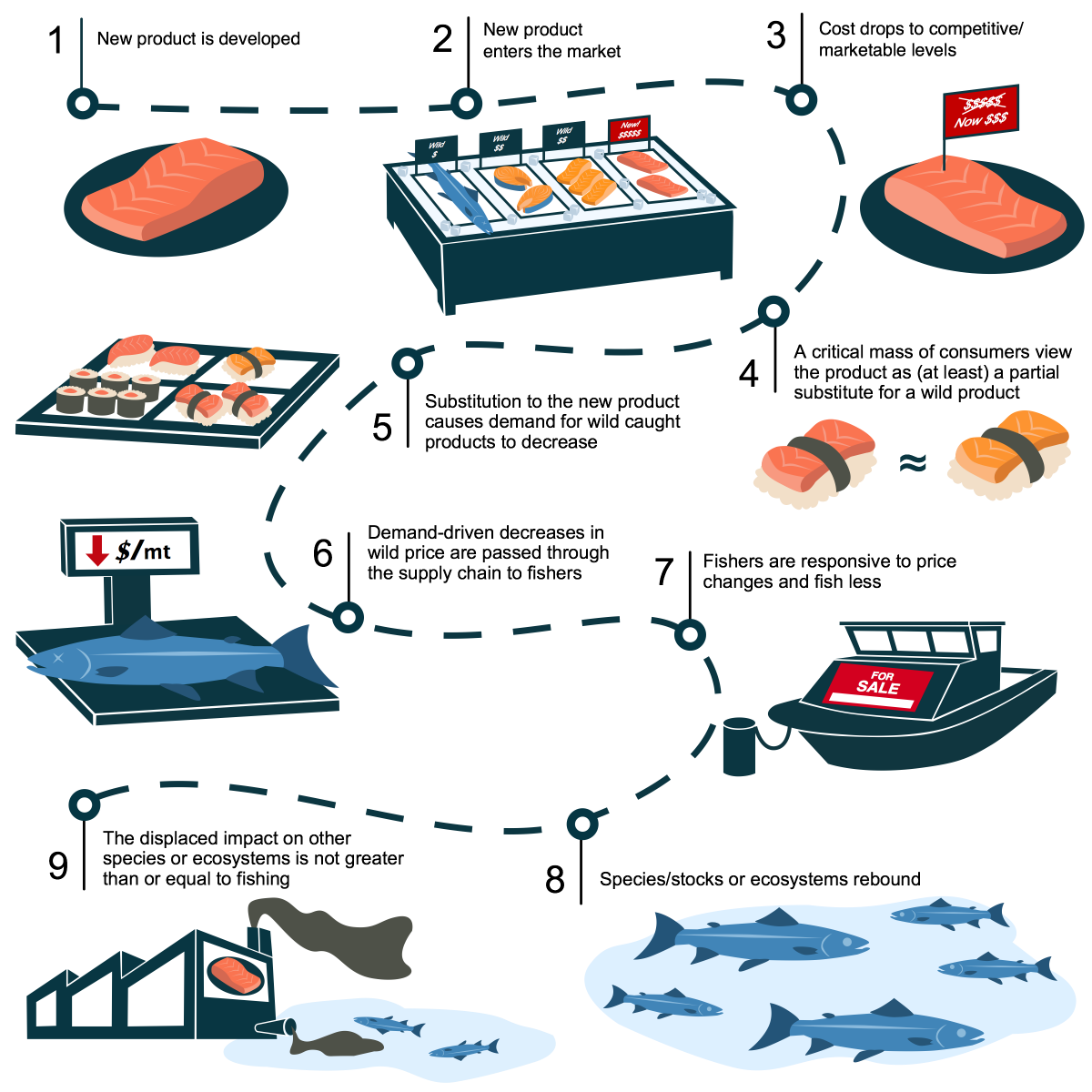 One of the particularly challenging steps to overcome is the substitution step (Step 4) in large part because human behavior is difficult to shift. This can be further thwarted by media attention that reinforces the “frankenfood” perception. For this step to be successful, consumers will need to be willing to adopt the new product and fully disadopt (stop eating) wild caught counterparts. While 65% of U.S. consumers say they are willing to try cell-based meat, only one-third are willing to make it a regular part of their diet. Consumer behavior is a large source of uncertainty in the uptake of cell-based seafood, as the reasons for when, why, and how people make substitutions when new products are introduced are poorly understood, especially in the case of novel foods.

Though the opportunity for ecosystem improvement is limited, we find that overfished stocks that are not heavily impacted by other anthropogenic stressors have the highest likelihood of success. As of now, there is a mismatch between the species focused on by cell-based seafood companies - high value species like salmon and tuna - and those that would provide a conservation benefit. While this helps achieve price-competitiveness, cell-based products of these high value species will typically not lead to conservation success in the long run because their wild-caught counterparts are often sustainably managed, or there is an existing competitive aquaculture market.

For example in 2019, two companies produced eight shrimp dumplings for USD$5,000 per kg and a USD$200 salmon sushi roll. Prices will drop as the technology advances, but it will still be difficult for these cell-based products to compete with their aquaculture counterparts, where shrimp and salmon can be produced at USD$1-8 per kg and USD$5–9 per kg, respectively.

This is just the first of many papers stemming from the cell-based seafood research team. To learn more about the project visit the team’s website. Keep your eyes peeled for additional papers looking into demand-driven interventions and the role they can play in ocean conservation, what we’ve learned from aquaculture’s impact on the fishing industry, and details about just how crucial the idea of ‘disadoption’ is when considering consumer behavior and conservation outcomes.

Though we are still a ways off from seeing cell-based products on the shelf at your local grocery store, for now, many eyes are on Singapore, where regulatory approval for cell-based products in 2020 may pave the way for the next futuristic dinner party with a cell-based fish on the menu.